For a week this January I was fortunate enough to accompany Shelly Whitman and the Roméo Dallaire Child Soldiers Initiative (RDCSI) to Sierra Leone (my second of these visits) to help provide advice and recommendations on monitoring and evaluation of conflict prevention programming. Specifically, the Dallaire Initiative is piloting a project that, in partnership with Sierra Leone’s Pikin-to-Pikin Movement, aims to establish three after-school clubs as facilitating sites for the learning of peace and conflict prevention in grade school children. The project was largely an output of a session of the Initiative’s signature programme, the Training of Trainers, which occurred in November 2016. With my background in children’s rights, youth engagement, and qualitative research, I have been working with the Dallaire Initiative for several years now in support of their work.

I have been humbled by this experience, but equally reaffirmed in my beliefs that children and young people are not necessarily those to be taught of the world, but also teachers themselves.

On this particular mission, we first travelled to Port Loko, about 1.5 hours outside of Freetown. During the drive, Sierra Leone was once again reaffirmed to me as a staggeringly beautiful country. Outside the windows of our off-road prepared 4×4, the world was pocket-marked by great plains, dense jungle, and estuaries teeming with wildlife. It is deeply saddening to recall the immense challenges faced by this country over the last several decades: war and conflict; Ebola; natural disasters. And yet, despite this, I have been consistently taken aback by the character of resilience that permeates Sierra Leone and its people, a drive to ensure that their future will be written of their own accord. In no place has this been more apparently than the three selected pilot sites for this project.

We arrived at our first school in the Port Loko District, a low building of three class rooms, built of cinder blocks and corrugated steel roofing, for what we expected to be a brief meeting with teachers and local partner coordinators. Instead, and indeed what would become a heart warming trend in the days to come, what we would be witness too was a full blown student performance, complete with song, dance, chants, and reciting of self-authored peace slogans. There were probably 80 people in attendance. We spoke about the project, in particular to sensitize parents to the purpose of the clubs and were well received. Similarly in Makeni, our second designated school, the community and students seemed thoroughly engaged in the project, facilitated by eager teaching professionals and elected club leaders.

This excitement for the work the Dallaire Initiative proposed to pursue, both by young people themselves as the designated agents of knowledge mobilization and by community members, many of whom had been witness to the country’s horrific civil war, was as positive as one could hope. In Moyamba, the site of our final school club, we were led through a procession of friendly “Hellos” and handshakes to be sat under a designated Peace Tree, the site selected by children to host their forthcoming meetings and activities. Local police were on hand to pledge their support of the project and to assure the crowd that they would be there to create a safe space for the club. CSO representatives highlighted their eagerness to get involved. Teachers expressed profound recognition of the need to teach young people of peace so as to nurture a future without war. All the while we repeated to all that this project was not ours, it does not belong to us. But instead, the community should themselves take both pride and ownership of its activities, thereby allowing for its distinct evolution according to the needs of that particular area.

To me, however, the most impressive group amongst all those we met were the young people themselves. They demonstrated a surprisingly robust understanding of peace at such early ages. They were able to ground what can often be an academically heavy and uncomfortably abstract concept in reality, displayed through their cheers, their songs, their poetry, their artistry, their skits, and their display of messages. They were identified, and they themselves self-identified, as a new generation of hope for Sierra Leone, a wealth of untapped knowledge and determination to ensure the continuing of peace and prevention of conflict in that country. They were, simply, true leaders.

I have been humbled by this experience, but equally reaffirmed in my beliefs that children and young people are not necessarily those to be taught of the world, but also teachers themselves. We must take every opportunity to engage them constructively and on equal footing, as we are doing in Sierra Leone. I look forward to continuing my participation in this project, at these three schools and, hopefully, in many more to come.

To share this story, use the shareable image below on your social media. 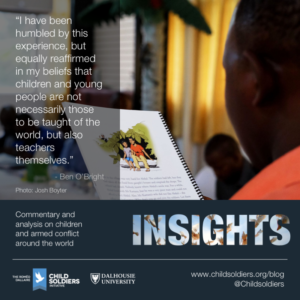