The Child Soldier
Giving Voice to Youth Affected by War

of I*EARN-Sierra Leone and Bill Belsey of I*EARN-Canada at the Great Wall of China, July 2000
The History of the Child Soldier Project:

The Child Soldier project had its roots in a friendship between two teachers as opposite ends of the Earth who are both part of iEARN, the International Education and Resource Network. Andrew Benson-Greene Jr. and Bill Belsey had already collaborated on other iEARN projects in the past such as The Bullying Project and Generations Can Connect. Andrew, Bill and their students had already shared much together, but in July of 2000 Andrew and Bill had the chance to meet in person at iEARN's annual international conference, which was then held in Beijing, China. While in Beijing, Andrew presented his ideas about conflict resolution, conflict prevention and peace building during a workshop which Bill attended. After the workshop and throughout the week, Andrew and Bill talked about what they might be able to do together to help shed some light on the issues of war and peace which are tearing Sierra Leone apart. After much discussion and correspondence, Andrew and Bill decided that they would work collaboratively to build this Web site, childsoldiers.org. This Web site would be a place where the youth of Sierra Leone could bear witness to the issue of the Child Soldier as they saw it impacting their lives and that of their families, communites and country. childsoldiers.org is the ongoing product of this collaboration which is made possible through the incredible global learning community that is iEARN 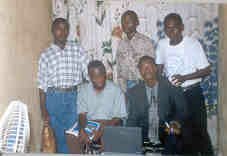 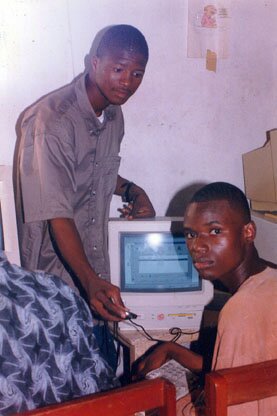 Andrew Benson Greene Jr (left), illustrates the use of the Sony IC Digital audio recorder and the installation of the Wavelink software to Abubakar Jalloh. This demonstration is important to enable Andrew and his students send attachments as audio/music files to support the on-going www.childsoldier.net project.
.

Our Writing / Our Images / Our Voices / Feedback / Home