The Child Soldier: Our Writing
Giving Voice to Youth Affected by War 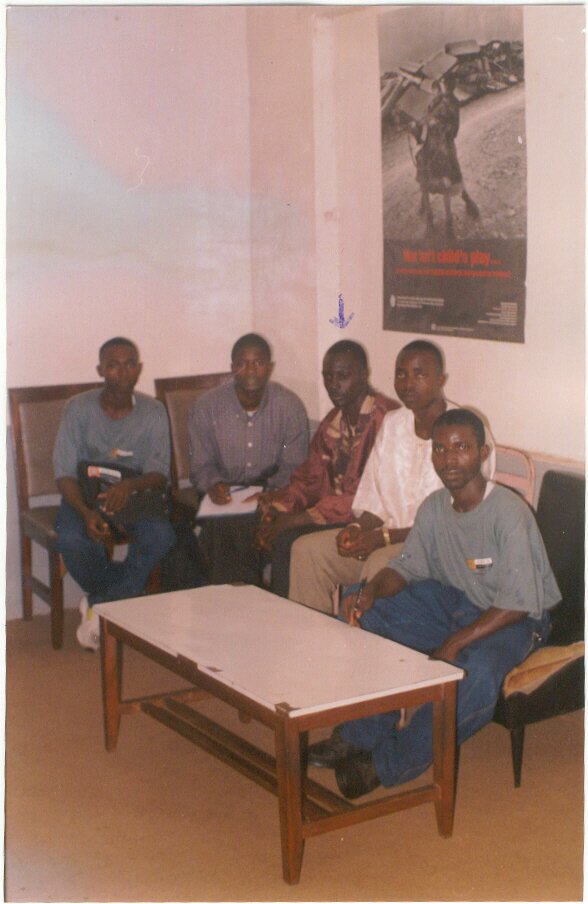 Andrew: What is your name ?

Ex-Child Combatant: My name is Sayo Kamara but they call me ' FLAG'

Andrew: How old are you?

Andrew: What is your educational standard?

Andrew: How did you join the RUF? or Did you take active part in the war?

Ex-Child Combatant: I was 16 years when I left Freetown in 1993 to see my
mother in a village called 'Mateneh' in the Northern province of Makeni.
That was when papa died and I could not fend for myself. The rebels attacked
this village and hunted young men and children like us. Most of us went and
hid ourselves. When the rebels did n't get the young men they wanted, they
went in search of us in the bush and I was caught together with three other
boys and five girls who were instantly raped, and held as wives to the
leading rebels. They asked us to choose whether we wished to be killed or to
join their ranks...

Andrew: Did you attempt to run...?

Ex-Child Combatant: No! They would have shot me and even endangered the
lives of other boys. So I told the rebels that instead of you killing us, we
will join you to fight against the government. At the time my mother did not
know my where abouts because of the nature in which we dispersed when rebels
attacked the village and I did not know ehere she was hiding or whether she
was killed.

Andrew: Where did they take you to and how were you get involved as a child
soldier in the war?

Ex-Child Combatant: We were led to a training camp in the thick bushes which
was not known to the government forces. We stayed there for six months and
they injected us with drugs often and we smoked marijuana so that we can
stay in fighting for a long time. I could cock a gun and aim, fire or shoot
at any opponent. The first time I fought in the war was in 1993 just few
months when I was captured at a place called 'Binkolo' in Makeni District.

Andrew: Did you kill you anyone? or shoot at somebody.

Ex-Child Combatant: I cannot remember but I think my bullets actually went
as astray bullets and may have hitted somebody? Many times I was held as
body guard to a rebel commander nick-named ''killed the killer'. As
bodyguard, I was also responsible for beating other newly caught children
who were to be conscripted as child combatants.

We walked on foot most times for long distances to attack a village. We
heard that our group of RUF fighters stationed at Lunsar were really being
attacked by the 'Kamajors' supporting the government. We therefore walked on
foot from Makeni where we have been fighting for 8-10 years to the town of
Lunsar. I held my heavy RPG for all through the walk untired because I had
drugs in my system. The distance was closer to hundred miles. We
succeeded in driving and clearing the Kamajors and the road was opened to
Freetown. We arrived in Freetown in January 1999 to capture the city. When
we reached a place called 'Waterloo', a town very close to the city on the
1st of January 1999, we were differentiated. Some of us were ask to stay at
Waterloo to man the check point put up by the RUF there and to guide the
area.

Andrew: Okay... how did you manage to join the Disarmament, demobilization,
and Reintegration programme (DDR).

Ex-Child Combatant: We left Waterloo after the January 6th invation of
Freetown because it was no longer safe for us. We retired to our original
base of the RUF called ''Zogoda' very close to Kailahun District. We were
allowed later by the chief rebel commander called ' Superman' who said we
the smaller rebels must be released to UNAMSIL. Superd some other elder
rebels decided to release us to UNAMSIL because they wanted to test the
Government and UNAMSIL whether they were sincere and were offering us to
check whetehr we will be killed, imprisoned or the peace process will hold
water. So we the child combatants were like scapegoats, like sacrificial
lambs.

Andrew: Where were you and all the other child combatants taken to by
United Nations Armed Monitoring Greoup in Sierra Leone?

Ex-Child Combatant: UNAMSIL took us first to a place called LUNGI Camp
where they gave us mats to lie upon, five in a small room and we were given
food three times a day. Then we were asked by (UNAMSIL), whether we have
families in Freetown. Although I was not sure whether my mother was alive, I
answered that I have my mother in the city and I was released. Actually, I
just wanted to get some freedom and live with other boys and play football
or go to the stadium.

UNAMSIL, later realized that my mother was still not around and we were
brought to the DDR Head Office in Freetown. I told the officials I want to
go to school, but I was only placed at a Training Institute as a motor
vehicle mechanic. Now I can repair all kinds of vehicles.

Andrew: Will you love to begin schooling now.

Andrew: What will you like to tell the world through I*EARN Sierra Leone?

Ex-Child Combatant: Well, as for me, I still want to go to school to get
education but I don't have a sponsor. I want to communicate with other Young
people and tell them my story and I really happy to hear that hopefully we
will get involved in computer.

Andrew: Thank you very much Saioh kargbo, I know that through I*EARN your
message will be communicated and hope you will get possitive feed back for
your educational needs.