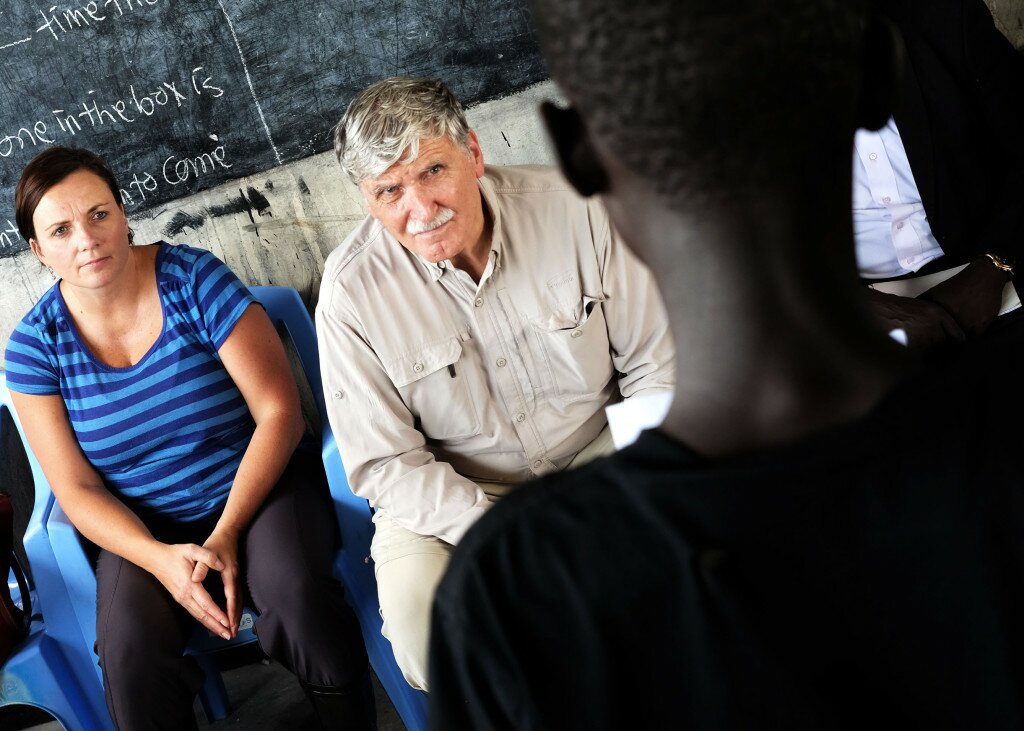 Roméo Dallaire is founder of the Roméo Dallaire Child Soldiers Initiative, a global partnership with the mission to end the recruitment and use of child soldiers.  A celebrated advocate for human rights, especially in regards to child soldiers, veterans, and the prevention of mass atrocities, General Dallaire is also a respected government and UN adviser, a best-selling author, and former Canadian Senator.

Throughout his distinguished military career, General Dallaire served in staff, training, and command positions through North America, Europe, and Africa, rising in rank from Army Cadet in 1960 to Lieutenant-General in 1998.

Most notably, General Dallaire was appointed Force Commander of the United Nations Assistance Mission in Rwanda prior to and during the 1994 genocide.  General Dallaire provided the United Nations with information about the planned massacre, which ultimately took more than 800,000 lives in less than 100 days; yet, permission to intervene was denied and the UN withdrew its peacekeeping forces.  LGen Dallaire, along with a small contingent of Ghanaian soldiers and military observers, disobeyed the command to withdraw and remained in Rwanda to fulfill their ethical obligation to protect those who sought refuge with the UN forces.

His courage and leadership during this mission earned him the Meritorious Service Cross, the United States Legion of Merit, the Aegis Award on Genocide Prevention, and the affection and admiration of people around the globe.  His defiant dedication to humanity during that mission has been well-documented in films and books, including his own account: Shake Hands with the Devil: the Failure of Humanity in Rwanda, which won the Governor General’s Literary Award for Non-Fiction in 2004 and the Shaughnessy Cohen Prize for political writing awarded by the Writers’ Trust of Canada.  It provided the basis for an Emmy Award-winning documentary as well as a major motion picture of the same name; and, has been entered into evidence in war crimes tribunals trying the perpetrators of the Rwandan genocide.

General Dallaire’s 1997 revelation that he suffered from Post-Traumatic Stress Disorder as a direct result of his mission in Rwanda paved the way for destigmatizing this potentially-lethal Operational Stress Injury among military veterans as well as first-responders.  Though it led to his being medically released from the Canadian Army in 2000, he has devoted decades of passionate leadership and advocacy to the issue on behalf of other veterans struggling with PTSD, including the publication of his bestselling memoir: Waiting for First Light: My Ongoing Battle with PTSD.

LGen Dallaire was born in Denekamp, Holland, on 25 June 1946, to Canadian Army Sergeant Roméo Louis Dallaire and Catharina Vermaesen Dallaire.  He was raised and educated in Canada, joining le Collège militaire royal de Saint-Jean in 1964 (later assuming command of this institution as Brigadier-General in 1989), and graduating with a Bachelor of Science degree from the Royal Military College in 1969.  He also attended the Canadian Land Forces Command and Staff College, the United States Marine Corps Command and Staff College in Virginia, and the United Kingdom Higher Command & Staff Course. LGen Dallaire holds honorary doctorates and fellowships from near three dozen universities in Canada and the United States.

LGen Dallaire is an Officer of the Order of Canada, a Grand Officer of the National Order of Quebec, and a Commander of the Order of Military Merit.  He is the recipient of the United Nations Association of Canada’s Pearson Peace Medal, the Arthur Kroeger College Award for Ethics in Public Affairs from Carleton University, the Laureate of Excellence from the Manitoba Health Sciences Centre, the Elie Wiesel Award from the United States Holocaust Memorial Museum, and the Harvard University Humanist Award.

General Dallaire has served on UN Advisory Committees on Genocide Prevention and Peacekeeping Training, and as Special Adviser to Government Ministers on Veterans Affairs, National Defense, and War Affected Children.  He also served as a Canadian Senator from 2005 to 2014.

However, since the publication of his book (and subsequent documentary) They Fight Like Soldiers, They Die Like Children: The Global Quest to Eradicate the Use of Child Soldiers in 2010, General Dallaire’s primary focus has been his work with the Roméo Dallaire Child Soldiers Initiative, continually seeking innovative ways to assist militaries worldwide to help eradicate the use of child soldiers, a mission to which he has committed the rest of his life.